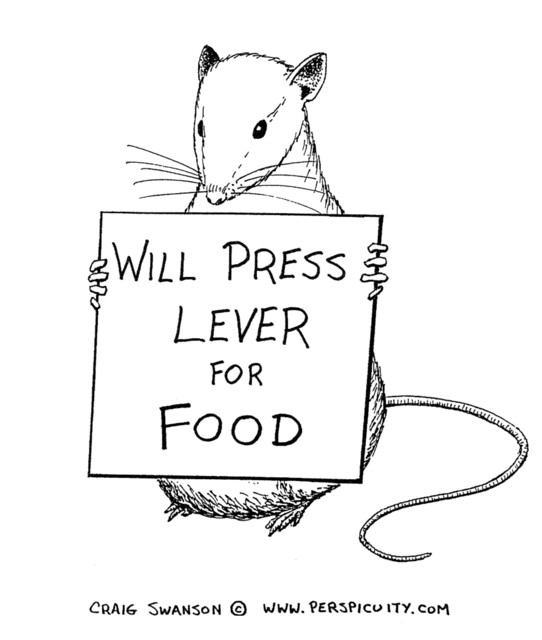 When I came across this hilarious cartoon by Craig Swanson (with kind permission) during the research for my book I was wondering which scientific experiment is most inspiring to cartoonists.

Skinners operand conditioning Swanson took on is definitively among the top ten (see Tom Cheneys take on Skinner from the "New Yorker" or this beautiful example). Even more widespread are Pavlovs dogs. So popular in fact that the cartoon site cartoonstock.com runs them in an own category with 19 cartoons. I like this one.

Konrad Lorenz' imprinting studies have a steady following among cartoonists too. Among them Gary Larson. But the front runner probably is the rat in the maze which goes back to a 1900 experiment by Willard S. Small (here my account on the origins of what today probably is the most widespread symbol for science itself: the rat in the maze). Do a google search for rat, maze and cartoon and see for yourself.

All those experiments have in common that they are about human and/or animal behavior. A subject that renders them especially attractive for cartoonists. They are also very closely related to each other. One almost the inevitable sequel to the other as you see when you read the accounts Rat on a Detour, Pavlov only rings once and Skinners Box.

Other fields inspired cartoonists much less. In biology it was the cloning of dolly in 1996 that initiated a whole new category of cartoons (like this one) and in physics Franklins kite and the hadron collider at CERN make for subjects.

To my knowledge there is only one cartoon that managed to include references to two historical experiments at the same time (one of them a thought experiment though). Here it is.

Please feel free to share your links to cartoons about experiments. The rule is that they must refer to a particular experiment not just any lab situation.